5 Advantages of a High Safety Factor For Industrial Rigging Equipment 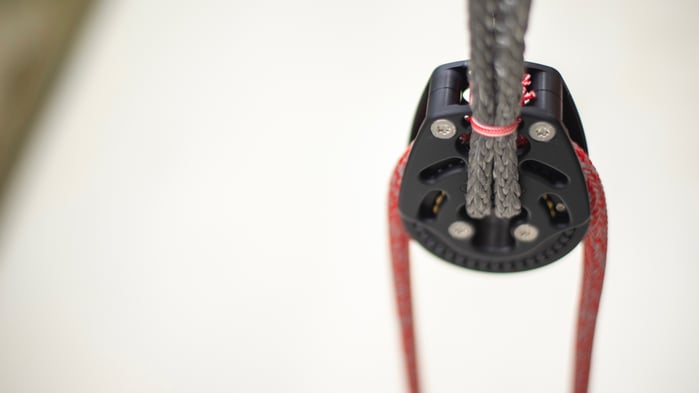 Most industries prefer a 10:1 safety factor of breaking load to expected load for industrial rigging equipment.  In other words, if most tasks in general use will involve burdens of around 100 lb on the equipment, it should be able to support a maximum load of 1,000 lb before breaking.

The reasons for this disparity are in the name: safety factor. Unexpected shock loads, accidents, environmental factors, and gradual degradation of the equipment can all play roles in closing the gap between the usual expected load and the absolute breaking load—which will cause a dangerous failure if it is ever exceeded.

The higher the rigging safety factor, the better.  And robust industrial rigging equipment—with a breaking load that far exceeds normal operating conditions—will show its value in more ways than one.  Here are five advantages of selecting material that gives you a sky-high safety factor:

Higher breaking loads don’t always mean heavier, more cumbersome equipment.  Modern materials and technology may give you access to a product that’s similar to the one you’re already using but with double the breaking load.  This makes a huge difference in the versatility of the blocks, pulleys, and ropes in your system.

Durable, heavy-duty synthetic polymers and thermoplastics like Nylatron® and Torlon®-based equipment, for example, are much lighter than steel.  But they’ll also wipe up the competition if compared alongside traditional plastic pulleys.  Industrial equipment made with these materials or rigged with high-grade HMPE fiber ropes like those in Dyneema® Ocean 5000, can be used for a wide variety of tasks that require extreme loads.

You may have initially invested in the equipment  to handle a moderate task, but an extreme breaking load (with perhaps a 20:1 safety factor) means you’ll get even more robust use out of it in the future.

2. The Workers Gain Peace of Mind

There’s something to be said for extreme confidence in the workplace.  Even if the safety factor of your industrial rigging equipment can generally cover the day-to-day responsibilities, you don’t want to leave any doubt in your team’s mind that it will stand up to the unexpected.

Workers that are constantly thinking about the possibility or risk of failures aren’t able to think as clearly or act as decisively.  A high rigging safety factor allows workers to operate according to best practices with confidence, and not instinctively or out of fear—because they’re positive it will hold.

First of all, you’ve got to have load-rated equipment to be certain that you’re operating with a high safety factor.  Already, that takes some guesswork out of the equation—the industrial rigging equipment has been tested, and its limits are clearly defined.

Second, an extremely high safety factor means you won’t need to worry about breaking out a calculator for almost any of your normal, expected applications.  And the last thing you want when working with industrial rigging equipment is to have to estimate the chances that it will break.

The load you’re lifting is only one part of the load on your industrial rigging equipment.  Friction in the system can exacerbate the total load the equipment will feel. More leeway in the rigging safety factor means that friction creates less risk of pushing loads into dangerous ranges.

And if you’re using equipment with extremely low friction, in addition to a high breaking load, you’re even better off.

A high safety factor will significantly reduce the burden of repairs and maintenance since your industrial rigging equipment will always be operating at such a low percentage of its total strength.  This means you’ll need to make fewer purchases and achieve greater total value from the equipment over time.

Finally, your workers will be able to develop familiarity and comfort with the equipment, using it for longer periods between upgrades or changes.  A high safety factor is a value-add that gradually pays for itself.