Different Types of Blocks, Pulleys, and Ropes and How They Work Together 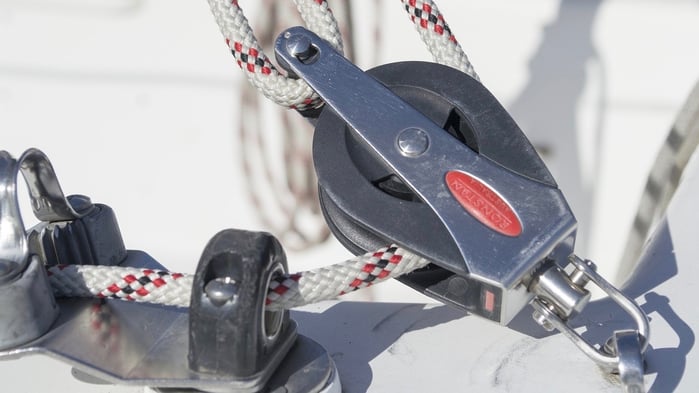 The many possible combinations of pulleys, blocks, ropes, and other hardware for your system can make the process of selecting and assembling the ideal equipment daunting, but that doesn’t mean it’s any less important.

If you mismatch wire ropes with acetal sheaves, or fast-flying counterweighted theatrical electrics with slow-moving threefold purchase blocks, then you’ll reduce the efficiency, longevity, and possibly even the safety of your system.  Each of these technologies has a purpose and material compatibilities to consider. Here are some guidelines on how they work together to get the job done.

Block and Tackle: How to Gain Advantage

How Hardware and Ropes Work Together

Comprised of an axle, a wheel (sheave), and a frame or shell (block), the pulley is one of the six simple machines defined by Renaissance scientists.  It is designed to change the direction of force in a chain, rope, cable, or belt that runs part way around its circumference.

When a force changes direction over a pulley, there is a resultant increase in friction and stress on the system bearing the load.

A static load is a load that is stationary for longer periods of time. The pulleys that hold these loads are designed to prioritize the strength of the material (perhaps with a stainless steel race or side ribs) and maximize the force the pulley can bear without failure.

Others intended for the repeated stresses of dynamic loads must minimize the friction in their designs.  Ball bearing pulleys and self-lubricating Nylatron® sheaves reduce friction innately.  Friction can be a destructive force on your pulley, as they generate heat and slow down the system.

Here are a few terms for pulley styles with a specialized purpose:

A well-designed pulley can incorporate several advantages simultaneously.  Our line of pulleys and blocks are optimized for both dynamic and static loads, load-rated for intense stresses, and made with materials and bearings that significantly reduce harmful friction.

Total Force on a Pulley

Keep in mind that a single pulley is always bearing twice the load of an object it is lifting, as a force equal to the object’s weight must be applied to the other end of the rope to move it.  This means that the object’s weight hangs from one side of the pulley, and an equivalent weight is exerted on the pull line side. Lifting a 500-pound engine block puts 1,000 pounds of downward force on the pulley.

Intense weights like this are challenging to manage with a 1:1 ratio of force applied to the rope to force exerted to hoist the object—if the pulley can even endure it.  This is why pulleys are often placed into block-and-tackle mechanisms.

Block and Tackle: How to Gain Advantage

One or more pulleys fitted together into frame forms a block, and two blocks can be reeved together to increase mechanical advantage by a multiplier equal to the number of sheaves in the blocks that make up the tackle system.  These are common in multiple industries, such as boom vang systems for sailboats.

The force required on the pull a line to lift the object will be reduced by the ratio of mechanical advantage, but the length of rope necessary to move it is multiplied.  For example, a gun tackle with an advantage of 2 would need only half as much force to hoist an object (250 pounds to lift that 500-pound engine block), but it will also take 20 feet of line pulled through the system to lift it only 10 feet.

There are many levels of advantage possible in block and tackle:

Usually, the pull line is drawn in the opposite direction that the hoisted object will move (rove disadvantage).  However, if a tackle has the pull line inverted to go in the same direction that the object will move (rove advantage), you always gain 1 more ratio of mechanical advantage, because the number of passes between blocks is increased by 1

This can make the pull more difficult and less ergonomic, so a separate “snatch” block can be incorporated to spin the rope back to the original direction of pull, without affecting advantage.

A gun tackle with rove advantage, for example, has a mechanical advantage of 3.  A threefold purchase can have its advantage increased to 7.

While a block and tackle could theoretically include as many pulleys as you like, the amount of friction on the pulley shafts will eventually become a significant source of friction and resistance in the system.  This can slow things down, reduce some of your advantages, and put wear on the ropes.

To mitigate this, multiple ropes can be threaded through the assembly of blocks, creating a compound tackle. These systems compound the mechanical advantage of two tackles by attaching one system to the pull-line of another system.  A gun tackle that is rigged to pull the line from a second gun tackle provides a mechanical advantage of 4 on the load attached to the second tackle (2 x 2).

The driver behind a pulley system is the wire, rope, chain, or belt that rests in the grooves of the pulley’s sheaves.  Other soft goods may be involved in the overall task, such as slings or harnesses that support the load, but it is the nature of the material contacting the sheaves that will have the most impact on your system’s compatibility, efficiency, and useful life.

There are many different types of rope used in pulley systems and it’s critical that you match your rope to both your purpose and your pulleys.

Made of metal wires wound into helixes around a core, steel wire cable has been an industry standard for generations.  Steel is a hard substance that resists cutting and abrasion and can tolerate extreme temperatures.

Some disadvantages are its tendency to kink or permanently deform if bent too sharply its vulnerability to moisture, and its cumbersome weight.  Overall, steel is far less tolerant of bending forces than fiber. Stainless steel does resist rusting and corrosion but is far more expensive than other steels.

Fortunately, there are a plethora of synthetic options that have none of steel cable’s drawbacks, and either match or exceed steel’s tensile strength, size-for-size—sometimes by a huge margin.

Many industries are making the switch to HMPE (Dyneema®), liquid crystal polymer (Vectran®), and aramid (Kevlar® or Technora®) based synthetic ropes.  Compared to organic fiber ropes and synthetics of the past, these scientifically advanced fibers can be impressively resilient when exposed to harsh substances, severe weather conditions, and abrasive forces.

These options are typically reserved for specialized purposes.

Chains can hoist truly enormous loads and use a very different style of pulley system called a “chain hoist” or differential pulley.  They’re expensive, incredibly heavy, and can’t move with the speed and efficiency of soft goods but can be effective for 500-pound engine blocks.

Belts are most often used on fixed pulleys that transfer force between a shaft (attached to the pulley’s axle) and the belt.  Common in engines or mechanical systems, you won’t see belts attached to objects or used to hoist dynamic loads. Belt sheaves use flat-bottomed grooves to maximize grip on the belt.

Blocks for steel cable are often heavier, have larger diameter sheaves, and deeper grooves than blocks used with fiber rope.  This prevents sharp bending or twisting of wire rope, so it won’t kink, deform, or set a curve in its memory.

Stainless steel sheaves handle cable well but are not compatible with fibrous rope on account of the level of friction they generate. Also, steel can be heavy and costly, meaning there are usually more effective options.

Sheaves in aluminum and Nylatron®, however, can accommodate either fiber rope or steel cable while still remaining lightweight, durable, and low-friction.

Finally, the grooves on your sheave must accommodate your purpose and your rope.  Usually, U-shaped grooves are best for ropes because they minimize friction and cradle the rope (to prevent flattening or pinching). Ensure that the groove is 5-10% wider than the diameter of the rope.

V-profile grooves are sometimes used for wire, which is less flexible than fiber rope.  This design increases grip because the rope is pressed between the two walls of the groove rather than resting on the bottom.  However, this also means more friction and wear on the rope.

How Hardware and Ropes Work Together

One of the most critical challenges to getting your ropes and pulleys to work together is understanding that they are separate technologies, with frequently divergent load ratings.

Today’s synthetic fiber ropes have advanced through science to exceed the strength of steel by a dramatic margin, weight for weight.  The breaking and working loads of rope are increasing at an astoundingly rapid pace, but this great strength can sometimes be difficult to utilize because pulley technology has lagged in load tolerance.

A 6-millimeter piece of rope can now support the weight of a VW beetle, but you may not be able to put a pulley on it because, at that small size, it would be very hard to find a pulley strong enough.

Even with the more reasonable 500-pound engine block discussed earlier, it would be easy to make the mistake of selecting a rope that is more than strong enough to hold a given weight, putting it on a pulley that cannot hold so much weight safely, and then pay the consequences.

Pay attention to the difference between the recommended “working load” and the much higher “breaking load” of your hardware.

For general use, it is usually recommended that hardware not operate above 20% of its maximum load (“breaking” load).  This is the working load.  Some materials can gradually degrade and weaken when operating too close to their breaking loads, and unexpected mishaps can suddenly increase the load on the system.  Therefore, using a small percentage of the hardware’s total strength is ideal for safety and integrity of the system.

If your pulleys or blocks should anticipate high shock loads, like falls in abseiling or rock climbing, they should prioritize safety and usually operate at an even lower percentage of their maximum (perhaps only 5%).

Rigging products, like lifting or hoisting systems, are only as strong as their weakest link.

Respect the relationship between the rope’s working capacity and the parallel capacity of the pulley it is threaded around.  For a heavy load, consider using a block and tackle system that increases your mechanical advantage and reduces the force and stress on each individual sheave by the same ratio.  Also, make sure to use load-rated equipment and compare the recommended working loads of all the constituent parts of your system to ensure compatibility.

With coordinated materials, sizes, and safe working loads, the elements of your system will be optimized to work together for years to come.