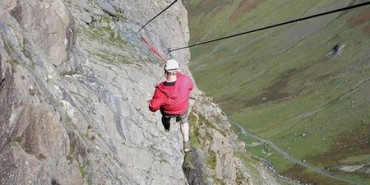 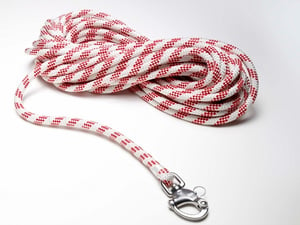 There are a various types of rope, but one important differentiation is whether the rope is dynamic or static. This distinction is important when considering which rope to use in different applications. So, what is the difference?

A dynamic rope is one that is specially constructed to have some long flexibility and movement. Dynamic rope has certain levels of elasticity and stretch – thus its name. It has a much higher elongation rate when loaded down. The purpose of dynamic rope is to be able to absorb the energy from sudden movement, such as a fall in climbing or mountaineering. The chance of failure and injury to the user, or integrity of the load being compromised, is lowered. It is true, however, that static and dynamic are both given elongation measurements to help denote this stretch capacity.

Both dynamic rope and static rope have several sub-types. Dynamic ropes are sub-categorized into three; single ropes, twin ropes, and half ropes, which are also known as double ropes in some instances. Single ropes, of which there are more than one hundred varieties, are the most common due to their ease and value for the cost and are widely used in various forms of climbing.

Twin ropes and half ropes are used for lead climbing where one rope is simply not sufficient. Twins are always used together, as if a single rope, which is where their name comes from. Half ropes are also used together but each rope is usually attached to something different – which accounts for the difference between twin and half. Although dynamic rope is often discussed for its usage in sports and climbing settings, it was discovered for its suitability there when being used in the sailing industry on yachts and the like. [from “it was discovered … and the like.” Please rewrite.]

For dynamic rope, the most common type is Kernmantle rope. Kernmantle rope is made up of an interior core (known as the kern), with a tougher outer sheath (known as the mantle). It is worth noting that this construction can also be utilized in static ropes. This design has come about to ensure maximum flexibility, as well as strength and durability. The outer layer makes sure that abrasion is minimized when the dynamic rope is in use, and the inner provides the tensile strength that is so needed in many of its applications.

Dynamic ropes come in a variety of different lengths, but obviously due to their nature, their length and strength will vary greatly with age. They also come in a variety of diameters [correct?]. Manufacturers do recommend that if a rope is exposed to a high drop weight that it be replaced, as it can seriously damage the integrity of the rope structure – even if there are no visible signs of wear. Dynamic ropes come with different force ratings that indicate how much strain they are capable under before risking breakage or failure.

Static rope is the opposite of dynamic rope. A static rope is not, by design, made to stretch or be flexible in its length when placed under stress. They therefore have quite different uses including lower level storage, caving, and in rescue operations. Static ropes can also be used in some climbing situations, but dynamic rope is by far the more popular choice for that application. Static rope is ok for abseiling, for instance, because here there is less need for elasticity. Instead of force ratings like dynamic ropes, static ropes are given minimum breaking strength measurements. This strength is weakened by the presence of knots, which should be taken into consideration.

Whether dynamic or static, rope care is key. Modern ropes are more often than not made of nylon, which doesn’t require as much maintenance as other forms of rope. Although degradation is not always visible, there are signs of wear which includes tufts poking out of the interior kern, or the exterior mantle appearing visibly thinner than perhaps it once was. Washing them to keep the surface free of debris and dirt is important to ensure the rope is capable of working at its optimum level.