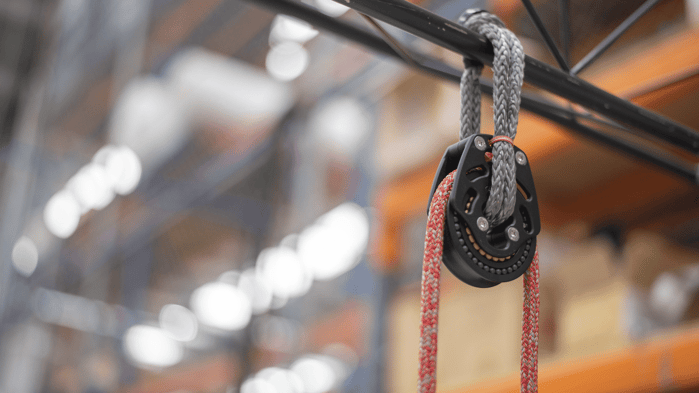 When a pulley block relies on soft goods (rope or straps) to secure it between its load and an anchor point, rather than hard fasteners, it is a lashing block.  Lashing blocks provide a versatile setup that can be used for single pulleys or whole block and tackle pulley systems to lighten the rigging and give more generous flexibility to the load.

However, the different forms and functions of lashing blocks can make picking one out a bit confusing.  If you’re wondering whether a lashing block is right for your purposes or don’t know which kind of lashing block you need, then Ronstan is here to help. Here are a few tips to help you find the ideal block for the job:

Traditional pulleys set a sheave (the wheel) on a bearing (the axle), where it spins as it feeds the rope around its diameter. For static loads, this approach works out fine. However, in situations where you need to reduce friction—perhaps due to extreme loads or frequent use—you should be using “ball bearing” blocks.  Ball-bearing blocks aim to spread the load across rollers or balls (instead of one axle) that roll between the sheave and the center of the block. 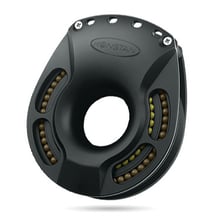 For example, Ronstan Industrial offers a Lashing Orbit Block™ that’s tuned for high breaking loads.  The Torlon® needle rollers help the block perform at strengths up to ten times that of steel, but it’s lighter, more compact, and produces far less friction. Acetal ball bearings guide the load and protect it from sideloaded forces that would contact the cheeks, while the heavy-duty Torlon® needles manage the load on the block itself.

Lashing blocks usually attach to soft goods in one of two ways: either through the center of the sheave or through the head of the block, above the sheave.

It’s crucial to remember, however, that lashing blocks are NOT interchangeable.  A rope that’s run through the head of a loop block risks failure of the block, as the head is not designed to withstand the same high load that the sheave can support.  Likewise, a rope run through the sheave of a straphead block could also risk damage to the sheave or the rope. Cutting or chafing could compromise the rope since the edges of the sheave were not designed for contact with soft goods.

Ronstan lashing blocks were designed for the rigors of professional sailboat racing, where they ensure that soft, light rigging doesn’t ding the deck or bang against the boom. But they also see use in many industries with similar needs for durable, high-performance blocks attached to soft goods, such as:

Lashing blocks are the perfect choice for any task that requires minimal weight and the freedom to flex with wind or dynamic movement in the system.