Pad Eyes - Folding, Round, Bolt Through, Screw In 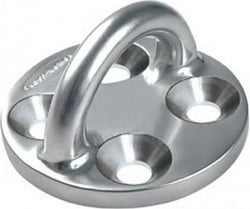 What is a pad eye?

A pad eye is a device that a line runs through to provide an attachment point, they are often found on boats, and often welded or bolted to the deck or the hull of the boat.

They are made typically of steel and consist of an opening for the line, usually a round opening, that is either attached to a steel plate or, in the case of removable pad eyes, are screw-in versions.

Where pad eyes are used

Pad eyes are extremely useful pieces of rigging hardware and also have a myriad of other uses, they can be used as running eyes, as anchor points for anywhere a line need to be secured, and they are used to complement the other hardware in load-lifting operations.

Sizing and typical range of sizes

As with most pieces of hardware there are a vast number of sizes and designs of pad eyes, all designed with specific applications in mind. In addition to different sizes and shapes of the loop to carry the line, there are also different designs of the base plate to which the loop is attached. When calculating the required size of a pad eye different stress factors have to be considered, i.e. the bearing stress, the shear stress and the tensile stress. Similarly stress factors of the base must also be taken into account, the shear stress, the tensile stress, the bending stress and the bending and tensile stresses combined.

Pad eye base plates are made in many different shapes, oblong, diamond shape, circular, square or oblong. Some are made with the loop capable of swiveling on the base. The shape chosen to be used for any particular use may, to some extent, be preference, however the factors given above must always be taken into consideration when determining the size. Also, to be considered is the angle at which the line will enter the pad eye and whether the pad eye should be folding, rigid or swiveling.

Most manufacturers will supply a full range of pad eyes to fit any marine, industrial or architectural need.