Weight and Friction in Theatre Rigging: How Pulleys Conquer Both 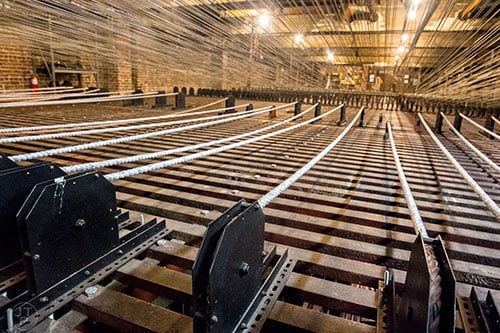 Theatre rigging professionals are faced with a paradox. Unlike most rigging applications, theatre rigging—by its very design—often calls for unprotected actors to walk around in the area beneath thousands of pounds of enormous flown hardware, electronics, and scenic elements.

At the same time, technicians may be required to fly elements in and out quite rapidly during scene changes, so as not to interrupt the audience’s immersion in the performance. It’s no mystery that intense loads, rapid motion, and friction can combine into a recipe for danger.

How can theatre rigging equipment face (and conquer) this paradox?

Modern synthetic fiber ropes and hybrid standard bearing/ball bearing pulleys each incorporate several critical features for overcoming these challenges.  In the case of synthetic fibers like high modulus polyethylene (HMPE), which can be 15 times stronger than steel cable, the advantages are obvious.

The HMPE fibers in Dyneema® SK78 rope, for example, have:

These traits make it ideal for use high up in the flyspace, where it must support incredible loads with minimal visibility and maximum urgency. Strong synthetic ropes have advanced far beyond what was capable in old hemp systems and can now outperform steel as well.  They’re lightweight, which is integral to managing the overall load in a theatrical rigging system, and the low elasticity and creep mean that you can count on your measurements (no bungee-cording or stretch during accelerated drops). And of course, the world-class strength provides peace of mind.

Ronstan offers both Ocean 3000 and Ocean 5000 Dyneema® ropes in a variety of diameters.  But what good is strong rope without hardware that stands up to the same challenges?

When theatre rigging is expected to move rapidly, as is the case with abrupt reveals behind quick-flying curtains, friction is a natural byproduct. On the other hand, ponderous electrics loaded with smart fixtures, motors, winches, audio systems, and other heavy equipment can put incredible stress even on slow-moving battens that only descend to the stage for maintenance and adjustments.

The Ronstan Core Block™ is designed with two stages in a dual-bearing pulley block that is equipped to handles both situations:

This carefully tuned two-stage system provides excellent performance across the full working load range, with features that cater to both dynamic and high static loads. For the needs of a theatre rigging professional, this is the perfect match.